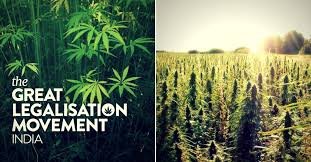 India voted in favour of rescheduling cannabis as a less dangerous drug, giving hope to weed activists and entrepreneurs about the perception of this “drug” changing.

In a highly-anticipated vote held on December 2, the United Nations Commission for Narcotic Drugs reclassified cannabis as a less dangerous drug. The historic vote removed cannabis from the Schedule IV category, where it was listed alongside dangerous and highly addictive opioids like heroin. The plant, that has been widely acknowledged for its healing and therapeutic properties, has finally been accepted for its medicinal value, even though it still remains a banned drug for non-medical use under UN law. 53 countries were involved in this historic vote, with 27 voting in favour of rescheduling cannabis. India was one of them.

As a signatory to the 1961 Single Convention on Narcotic Drugs , anyone caught peddling, scoring or smoking weed could be arrested in India under the obligatory 1985 Narcotic Drugs and Psychotropic Substances Act (NDPS). But while the way forward is still foggy, experts believe this historic vote could spark social acceptance and a wider framework when it comes to policing pot users.

“In India, the central government gives states the power to cultivate cannabis, and this new positive outlook will make state governments less hesitant to give permissions to growers and researchers” said Delzaad Deolaliwala, the co-founder of Bombay Hemp Company (BOHECO), an organisation that retails cannabis products and is also researching the medical and industrial use of cannabis. The licensed sale of cannabinoids (components of cannabis which are also produced by the human body) like CBD is legal in India, while states like Uttarakhand and Uttar Pradesh are allowed to grow marijuana for medical, industrial and research purposes. He explains that while clinical trials to determine the commercial and medical use of cannabis were being done with marijuana leaves, the new classification would allow for the plant’s buds and resin to be used as well.

“Earlier, we could only manufacture products made from bhang or the leaves of the cannabis plant using the ayurvedic perspective. The cannabis flower will still be a narcotic by definition, but it will now hopefully be better available to treat conditions like arthritis, stress, anxiety, chronic pain and epilepsy,” Deolaliwala said.

Cannabis is deeply rooted in India’s ancient scriptures, and in some Indian states like Rajasthan and Uttar Pradesh, bhang, an edible made from cannabis buds, leaves and extracts, is legally sold.

“Since India does not have an independent NDPS Act, the government would always have to worry about the UN putting sanctions if they tried to legalise cannabis, like they did in Uruguay,” Vinesh Chandrakant, an injury rehab specialist and director at CBD Store India, which sells medical marijuana products, told VICE. Chandrakant believes that the development will lay the groundwork for small-scale industries or independent farmers who want to cultivate high-grade cannabis strains.

“The fact that India voted for this rescheduling makes the government’s stance on cannabis clear,” Avnish Pandya, who is also a co-founder of BOHECO, told VICE. Pandya points out that despite a massive crackdown on cannabis in India over this year, and the media vilification that it prompted, the government’s official position does recognise the medical benefits of marijuana. However, he stresses, the sweeping change that will hopefully be rolled out only pertains to the medical use of the plant. “Anyone caught smoking ganja can still be arrested as this does not include the recreational use of cannabis. However, it could bring more social acceptance.”