The results of the recent elections promise another wave of progress for the surging cannabis market in the US. It should be noted that in 2020, five states with a population of about 21.2 million people in total opened up new markets. This new wave of legalization and the pro-marijuana trend that was observed in the elections shows you the will of the people. Currently, marijuana is now legal in 36 states in the US while 15 states have legalized recreational use for adults. President-elect Joe Biden is already well-known for his plan to decriminalize marijuana and expunge the criminal records of those arrested for possession of marijuana. The future of the cannabis industry is as bright as it gets.

The five new cannabis markets in the US are Arizona, Montana, Mississippi, New Jersey, and South Dakota. All five states recently legalized marijuana in one form or the other. In fact, South Dakota became the first state to legalize medical and recreational marijuana at the same time. In this article, I’ll extensively analyze all you need to know about these new cannabis markets, and how to tap into this upward trajectory. Don’t miss out on the opportunities the cannabis industry offers, it could be just what you need to turn things around.

The state of Arizona legalized marijuana use for adults in 2020. This legalization comes after the state had already legalized the medicinal use of marijuana in 2010. With a population of about 7.3 million, Arizona only comes second to New Jersey in terms of population among the new cannabis markets. This new legalization in Arizona is bound to come as good news to giant cannabis firms in the region. Companies like Curaleaf, Harvest, and MedMen are all bound to use this opportunity to foster expansion.

90% of the population in Arizona stay in the urban areas of the state which makes it a very bustling region. The state has a median age of 38 and a balanced ratio of males to females living in the state. The legalization of marijuana for adult use coincides with the fact that 60% of the state population is between the age of 18 and 64. The demography of the state is also well distributed. 54% of the members of the state are Whites, 32% Hispanics, 4% Blacks, 3% Asians, and 4% Natives. This makes the Arizona cannabis market scene very robust and diverse.

It should be noted that the state of Arizona had a GDP of $350.14 billion for the second quarter of 2020 and this accounts for 1.8% of the GDP of the US. With the legalization of adult cannabis use in Arizona, this number is bound to go up, way up! The cannabis industry always does good things to the GDP of a state.

With a GDP of $105.68 billion in the second quarter of 2020, the legalization of marijuana is bound to significantly increase the GDP of Mississippi.

The population of the state is predominantly White as the Whites make up 86% of the population. The state also has a good degree of adults, 59% of the population is between the age of 18 and 64. This population is definitely a potentially strong cannabis market. For a state that has a GDP of $47.72 billion which accounts for 0.2% of the GDP of the US, marijuana legalization is a very good thing, not just for the users but also for the state, as more revenue will be generated.

The state of New Jersey had earlier legalized the use of medical marijuana in 2010. They further consolidated this in 2020 by legalizing the recreational use of cannabis. The state has a population of about 8.9 million people with 95% of the population staying in urban areas. The state has a median age of 40 and more females (51%) than males (49%).

New Jersey has a very active and bustling population as 61% of the state is between the age of 18 and 64. The state also has a very diverse composition, 54% are Whites, 21% Hispanics, 13% Blacks, and 18% Asians. With a GDP of $574.02 billion in the second quarter of 2020, New Jersey is already generating a lot of revenue. It should also be noted that the success of recreational legalization by New Jersey is bound to influence neighboring states who have only legalized the medical use of marijuana.

South Dakota is the first state to legalize medical and recreational use of marijuana in the same year. The small state made the historic move to legalize both uses of marijuana in 2020. The state is the first to make such a move in the history of the United States. This move is bound to have a positive effect on the state that only has a population of about 884,000. However, it should be noted that the population is prime for cannabis success as 57% of this population stay in urban areas and have a median age of 38.

The state has more males (51%) than females (49%), although 11.9% of the population of the state lives below the poverty line. Hopefully, the legalization of medical and recreational use of marijuana in the state will bring numerous big cannabis firms to the region thus creating thousands of jobs. Others can also get into the entrepreneur side of things and earn good revenue as well.

These new cannabis markets have all it takes to take off and become really strong cornerstones of the cannabis industry. Their growth should be rapid and efficient so if you’re looking to invest in an emerging cannabis market, these are great options to consider. 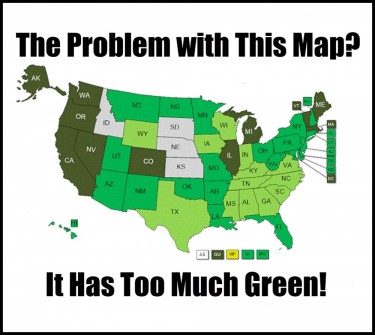 WHAT ARE THE BEST STATES FOR RECERATIONAL WEED IN 2021?