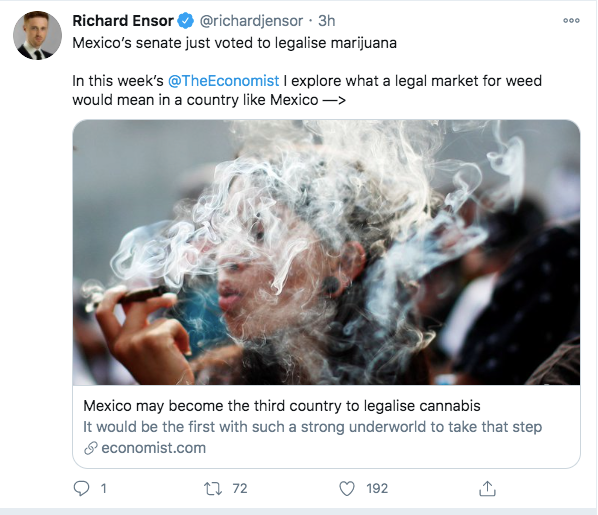 Here’s the introduction to that piece

In the public park outside Mexico’s Senate is a small forest of cannabis. Volunteers are staging a plantón (a punning way to say “sit-in”) to spur lawmakers to legalise weed. They tend to the 1,000 or so plants on Tuesdays and Thursdays, spraying organic insect repellent and picking up leaves. One volunteer, Leopoldo Rivera, calls it “the first non-clandestine plantation” of marijuana in Mexico since the government banned it a century ago. The police did not uproot the seedlings in February, when the plantón began. Some plants are now three metres (ten feet) tall.

On November 19th the Senate began debating a bill that would make Mexico the third country in the world, after Uruguay and Canada, to legalise cannabis for recreational use nationwide. For Mexico, the change seems riskier. It was once the world’s largest producer of cannabis. Campaigners for legalisation are watching how it will go in a country where organised crime is strong, the rule of law is weak and much of the economy is undocumented.