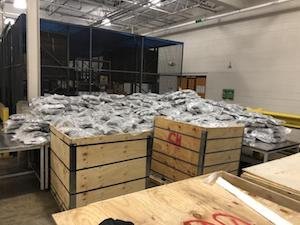 Yet another huge bust of cannabis coming in from Canada. This is about the third one of this size in the past 5/6 weeks. If one presumes border security  are only getting about 10% of what comes over there’s tonnes of the stuff coming in over the US’s northern border which implies that Canada needs to pull it’s finger out over enforcement on illegal grows.

The other open question could well be … Is legally grown Canadian cannabis being diverted to the black market and sent south. It’s not an unimaginable thought.

DETROIT – On August 23, U.S. Customs and Border Protection (CBP) Office of Field Operations Officers at the Fort Street Cargo Facility encountered a commercial truck operated by a Canadian citizen. The driver presented a manifest for steel wire destined to a distribution center in Chicago.  Upon examination of the truck, CBP officers discovered over 1,031 pounds of marijuana concealed in five wooden crates.