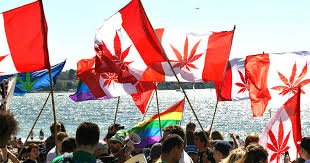 Cannabis is legal for both recreational and medicinal purposes in Canada. It was legalized nationwide under “Marijuana for Medical Purposes Regulations,” which was later improved and given the name of “cannabis for medical purposes regulations.”

According to Health Canada, the production, cultivation, possession, acquisition, and consumption of seeds, grains, fibers, stems, and flowers of Cannabis are allowed. Therefore, you will find Cannabis and it’s by-products in the form of edibles, flowers, and medicines in many online dispensaries in Canada. Each online dispensary Canada who deals in Cannabis (in any kind) has to register with the government to get a license for working as a registered dispensary.

On 19 June 2018, the Canadian senate passed a bill regarding the legalization of Cannabis and became the second country of the world where a drug was legalized. On 17 October 2018, it became legal across the country for recreational purposes.

According to the “Cannabis Act,” people aged 18 years old above can have up to 30 grams of dried or non-dried Cannabis in public.  Adults can consume it with food or drinks. However, organic solvents with concentrated products are not allowed. Every household is allowed to grow up to four cannabis plants.

Each province has its procedures for retail sales, and ownership rules also vary from place to place. You can carry Cannabis while traveling within Canada but not internationally. In October 2019, the federal government allowed the selling of edibles such as cookies, cakes, and brownies with a small proportion of Cannabis are its by-products with restrictions.

Keep in mind that driving under the influence of the drug is illegal everywhere; it does not matter if it is Canada or Uruguay.

Marijuana tourism is expected to rise as we travel from all over the world to Canada because it is easily accessible there and legally allowed to consume in public. If you are going from the United States or anywhere in the world, you can purchase marijuana or any of its products in Canada. But you need to follow all the rules and regulations regarding sale, consumption, and possession.

Moreover you have to be at least 18 years of age to safely buy and carry the safe quantity (30 grams) with you. This rule applies everywhere in Canada. You can also pack it in your checked bags on domestic flights. As Canada and the United States share their border, does not mean that you can bring it across the international border, not in the United States because it is 100% illegal.

If you plan to travel to Canada, make sure you are well aware of the Cannabis laws of each state. The legal age is 19 years bear in mind before you visit. Also, know that it is illegal to transfer the wheat or any other Cannabis product across the border for any reason. Therefore never try to bring it with you as you leave Canada.